After 4 days of eating everything that wasn’t tied down (so. much. food), Jerry & I  a) didn’t want to go out to eat on Sunday & b) wanted something lite for dinner.

I had some cod in the freezer so I decided fish tacos would be a good idea.  We are both partial to the grilled version vs. the breaded, fried version.  It was kinda ugly out so I skipped the grill and just browned them in the skillet.

Here is the recipe I used:

1 lb of cod (or other white flaky fish)
taco seasoning.

For those of you who are sticklers for details, I defrosted the fish, sprayed it with non-stick spray and sprinkled taco seasoning on both sides.  Then I headed a drizzle of EVOO in a large skillet and cooked on medium high for 3-4 min per side.  Once it was cooked, I just chunked it up with the spatula and sautéed it around in the pan.  Throw it on a corn tortilla, top with slaw & a chunk of avocado and eat.  Done & done! 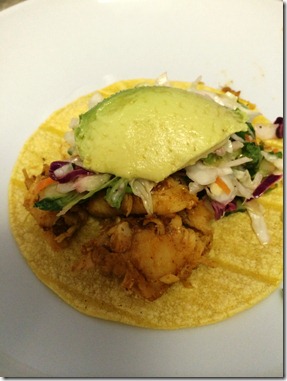 I made a simple slaw out of packaged coleslaw mix (why would you ever buy a whole cabbage for slaw??  Convenience for the win!)

Whisk dressing in a large bowl. Add coleslaw mix, 1/2 bunch of cilantro, rough chopped, and 1/2 a bunch of scallions, diced. Toss to combine. It’s better if it sits overnight.