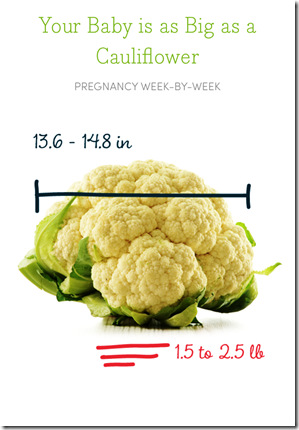 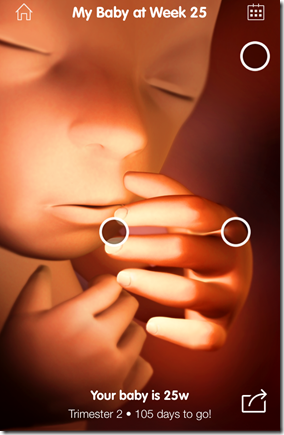 Baby’s Lungs Are Gearing Up to Breathe
Your baby is growing by leaps and bounds, reaching nine inches in length and passing the pound and a half mark — taller than two juice boxes stacked one on top of the other and almost as heavy as four of them. What else is going on this week? Your baby’s skin is turning pinker — not because he or she’s getting overheated (in fact, the amniotic fluid is perfectly climate-controlled, keeping your baby at an always comfortable temperature), but because small blood vessels, called capillaries, are forming under the skin and filling with blood. Later this week, blood vessels will also develop in your baby’s lungs, bringing them one step closer to full maturity — and one step closer to taking that first breath of fresh air. But at 25 weeks pregnant, those lungs are still very much works in progress. Though they are already beginning to develop surfactant, a substance that will help them expand with oxygen after the baby is born, the lungs are still too undeveloped to sufficiently send oxygen to the bloodstream and release carbon dioxide when baby exhales.

Baby’s Nostrils Open
The lungs aren’t the only system that’s gearing up for air intake. Your baby’s nostrils, which have been plugged up until now, are starting to open this week. This actually allows your little one to begin taking practice breaths. (Of course since there’s no air in there, your baby is really only “breathing” amniotic fluid, but it’s the practice that counts, right?)

And just to prove I don’t dress like Johnny Cash every day…here I am in real clothes! Will I ever NOT feel awkward in selfies??? 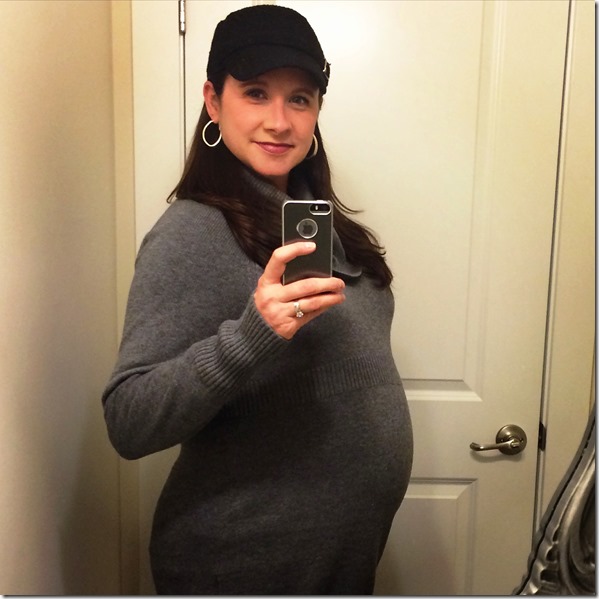 These beans are packing on the pounds & I’m absolutely thrilled at their growth!  They are growing at the exact same rate and look perfect.  They will continue to gain weight at a steady pace but should slow down toward the end of the 3rd trimester.  Baby girl was being shy and looked directly into my spine the entire time so we couldn’t get a good picture of her.  The pictures overall were pretty crappy.  This is the best one we had of Butterbean.  That is a picture of a picture.  I forgot to ask for a disc.

And there is this gem.  An attempt at Butterbean 3D.  It’s terrifying, right? 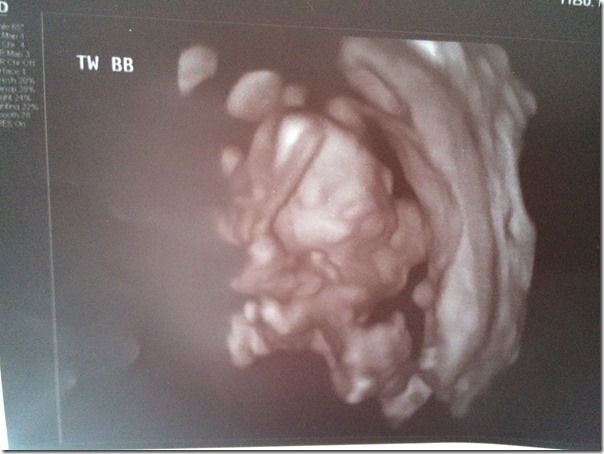 She was trying to get a good shot of one of Butterbean’s kidneys, as they couldn’t get a clear picture last time.  While she was concentrating on that area, she casually mentioned, “he must have just emptied his bladder” Um, excuse me? My son just peed in me? She thought that was hilarious “Yep”. Me, not so much.

All things look good.  My cervix looks “fine” (aka long and closed) and as of right now, they are both head down.  Limabean is at the starting gate and is sitting low.  Butter bean is a little higher and is leaning toward my right side. In case that’s confusing, here’s an illustration. 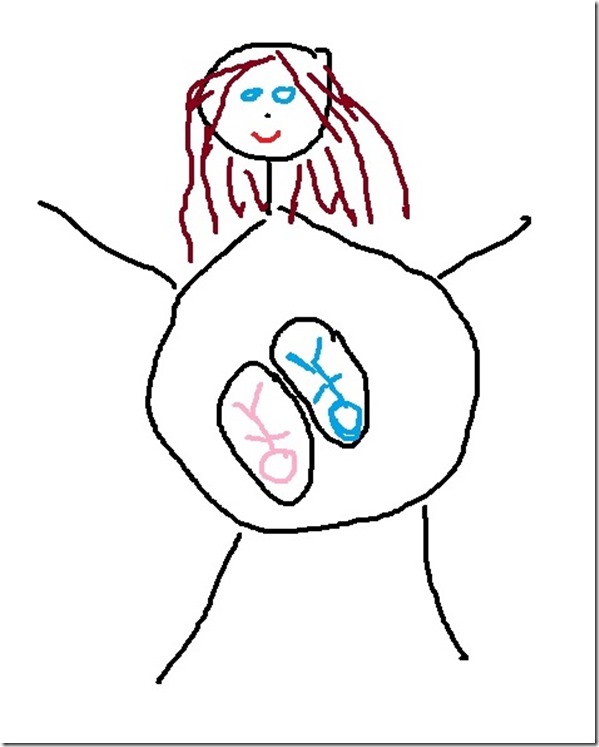 They should settle into their final positions around 31-32 weeks and at that point, we’ll have a good idea of how I will deliver.  I’ve decided if they’re both head down, I’ll go for natural.  If not, I’m opting for the C-section.  Have I mentioned this is my plan before?  I probably have…and probably will again…I’m still stressing over this whole delivery situation!

We met with an MFM doctor from West Penn following the ultrasound. She reviewed our scans and said babies look great.  She expects I’ll deliver around 35-36 weeks.  I didn’t really ask why she thought this because I was too busy calculating in my brain how freaking soon that is!  I’m hoping that was just an assumption based on averages.  I want to cook these babies until at least 37 weeks if I can.  But it’s out of my hands and they will come out when they’re ready.

So let’s get the complaints out of the way.  You knew they were coming!

Round ligament pain has picked up again.  Just certain ways I move, it hits me for a second. Knees and hips ache.  Alllllll the time! Maybe we should just assume I have achy joints and I can just stop talking about it.  But seriously, whaaaaaa, my knees ache!

I read this article on Scary Mommy, which is ridiculously accurate, and one of the things they talk about is skin tags. They are delightful little skin growths that pop up in high friction areas like your armpits, neck and under your boobs.  It’s your body going nuts with the baby news and producing extra random skin.  I’ve had a few skin tags pre-preggo but right now, it’s out of control.  I keep trying to shave them off..and it’s not working.  They supposedly go away after birth and I’m hoping that’s true.  Gross.

I have normal pregnancy stuff. I pee a lot, my skin is itchy, my boobs hurt, I’m hot sometimes, my fingers are swelling and my gums bleed if I brush too hard.  In the grand scheme of things, not too bad.  The majorly bad stuff has yet to show up or has gone away.  Fingers crossed!

For being almost 26 weeks pregnant with 4 lbs of baby in me (plus TWO placentas, sacs and extra fluid), I’m not feeling too terrible.

I need less sleep than I thought!  What a timely thing to figure out.  We’ve been going to bed @ 10/10:30…and by that, I mean getting into bed, not being in bed and watching TV for an hour…and waking up @ 5:30/5:45.  I sleep through the night (less 2+ pee breaks, which are a given) and I’m bright eyed and bushy tailed when I get up!  Good thing Jerry is a morning person too.  I’m annoying!

We got a new bed over the weekend and it’s awesome!  We went from a queen to a king and 1) it’s much easier to get in & out of as it’s lower to the ground 2) Jerry doesn’t hear me when I get up 832 times a night 3) it has a lot of support for my growing belly.

We don’t have to worry about our Beans and their future soccer careers.  Holy geez.  Their kicks are so strong…my whole body jumps!  You can really see them move from the outside.  I’m guessing it’s because they’re bigger but I feel them all day long now.  I love the little reminders that they’re in there.

Almond butter and grape jelly sandwiches top the list this week.  Every single day.  Still loving fruit in all forms.  I made another round of that sausage pasta this week with ravioli and it may just show up every week going forward!  Burgers are my protein of choice.  I’m getting lots of calcium from yogurt, cottage cheese and milk.  Cereal is on the menu 5-6 times a week.

Jerry & I went out for pancakes over the weekend and my blueberry short stack hit the spot!  I don’t think I’ve ordered pancakes in a restaurant, ever. But these Beans and their obsession with sugar are converting me.  Mmmmmm, pancakes!

I’ve noticed I’ve been kind of a grump this week.  I’m still pretty happy overall, but I’ve been having moments of irritability.  And unfortunately, I’ve been taking it out on Jerry. (Sorry sweetie!). He’s not doing anything wrong at all (well maybe not so many questions would help. omg, that man loves to ask questions! xoxo). And he’s amazingly supportive and takes really good care of me, so I feel really bad when I snap at him.

I’m starting to have some irrational anxiety about random things. And when I start thinking about something, it consumes me and I can’t let it go. Like being the first person to hold our babies after they are born. I’m obsessing on it! I read a story about a girl who had to be put under for an emergency C-section and when she woke up in recovery, her sister was holding her baby. Before she ever had a chance to hold him. She was beside herself and it threw her into a huge post partum depression because she felt like her sister would be forever bonded with her baby more than she was. I don’t even have a sister! It’s ridiculous. So, loved ones…no one holds the babies before I do, mkay? There. I feel better already. And of course the delivery thing. Still having crazy anxiety about it. This week it’s umbilical cords around their neck. Obsessing on that. And diapers. I’m obsessed with diapers. In particular, having enough and which ones won’t leak. So, yeah…I’m kind of a head case this week. It will get worse, I’m sure.

So did the Superbowl commercial people somehow know we’re having kids in a few months?  Good grief.  Between Run Like a Girl and all the Dads with their kids and that little boy who dies in an accident…come on!  And throw in the puppy that almost gets eaten by the wolf but then is saved by his Clydesdale security team, it was one big sob fest!  At one point, Jerry said “Where are all the hot chicks in bikinis and the funny beer commercials?  This is terrible!”  Agreed.

*  We’re starting to think about pediatricians.  We got a good recommendation from 2 different people and we’re going to an expectant parent orientation next week.  The practice is close to our house and they have walk-in hours every day.  Plus a whole bunch of education classes and kid activities.

*  We thought we had our boy name picked out but Jerry isn’t so sure anymore.  I shouldn’t be surprised (at all) because he’s very thorough in his decision making process.  We’re 95% sure we have our girl name…5% being that Jerry may change his mind in the next 10 weeks.  I’m sick of waiting for him to decide so I’m just calling them by the names we originally agreed on when I talk to them.

*  I ordered my breast pump!  I got a free Medela Pump in Style through my insurance.  That is the brand most people have recommended to me and I’m so happy I don’t have to shell out $300 for it.  I’ve opted not to take breastfeeding classes, even though I do plan on breastfeeding. Chiquita and her husband went to a class and provided a good summary.  I think it would be more beneficial to read up on it and then meet with the lactation consultant once they are born.  I learn so much more though actually doing things and I don’t think simulating breast feeding with a doll is going to help me much.

* I’ve started thinking about my birth plan. Do I even need a birth plan? Pregnant friends, are you doing this? I feel like there is so much I can’t really plan for but I guess I could lay out some preferences for my ideal scenario.

1 thought on “25 Weeks pregnant with Twins”