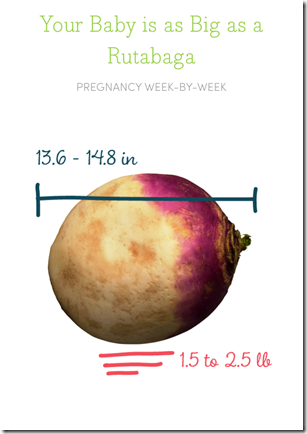 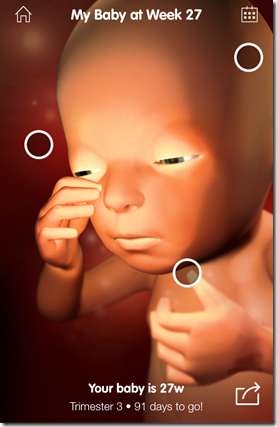 I don’t know what a rutabaga is but another app said they’re the size of a bunch of bananas.  I get that.

This week it’s time to trade in the old crown-to-rump measurement for a new head-to-toe standard. By the end of the second trimester, your baby is now measuring nearly 14 inches — more than a foot long. His weight is creeping up the charts too, coming in at just over two pounds (double four weeks ago). Most babies this age, yours included, still like to snuggle in a slightly curled position inside the uterus (thus the term “fetal position”).

Baby Recognizes Your Voices
Big news: Your baby may recognize both your and your partner’s voices by now. His auditory development (hearing) is progressing as the network of nerves to the ears matures — though the sounds he hears are muffled thanks to the creamy coating of vernix covering those ears. So this might be a good time to read and even sing to your baby (or rather, your belly) — and a good chance to start boning up on those nursery rhymes and lullabies you’ll need to be repeating (and repeating) pretty soon. While you’re at it, here’s another way to have some family fun at 27 weeks pregnant: If your partner presses his ear to your belly, he might be able to hear the baby’s heartbeat.

Baby’s Tasting…and Hiccupping
Your baby’s taste buds are very developed now as well (with more taste buds than he or she will ever have outside the womb, actually). Need a taste test? If you eat some spicy food your baby will be able to taste the difference in the amniotic fluid (but keep in mind that you’ll have different mealtimes, with your baby’s coming about two hours after yours). Some babies will even respond to that spicy kick by hiccupping. And although hiccups (which feel like belly spasms to you) may seem like they’re disturbing to your baby, he or she isn’t stressed at all. It’s just one more sensation that babies need to get used to.

I know you’re all thinking “She keeps complaining about her huge boobs.  Um, not so huge”.  Well, my friends, that it because my belly is just THAT BIG!

Seriously ladies…what is the big deal about that drink??  I’m really starting to think that preggos just like to complain about everything!  It tastes exactly like orange Gatorade.  It’s not thick or syrupy.  It’s not crazy sweet.  It’s cold and you have 5 minutes to drink it.  I don’t get all of the whining.

After I chugged my cocktail, I was seated in a cushy recliner with some GMA.  I brought a book but decided to take a nap instead.  Excellent idea.  I had my blood draw and then we were off to our Newborn Care class at West Penn.

Oh, and I haven’t received my test results back yet.  I have a doctor’s appt on Wednesday and they may be waiting until then to tell me.  I guess in this case, ignorance is bliss.  I’ll be stuffing my face with carbs and sugar until then.

We were about 15 minutes late due to snowy conditions and a house fire across the street from the hospital.

Overall, the class was pretty informative.  The major topics we covered were:

Jerry’s biggest icky baby factor at the moment is belly buttons.  He thought the baby came out and after they cut the cord, it looked just like our belly buttons do.  One of the videos showed the healing stump and he almost passed out.  And then they kept calling it a stump and I almost passed out.  (What is it with that word??  very ICK.)  And he’s horrified that it will just fall off one day and THEN WHAT DO WE DO WITH IT?!?! (Of course I had to remind him of the scene in Sex and the City where Brady’s belly button falls off and Miranda freaks out and the cat eats it.  I’ll probably make him watch it just for fun).

He’s still planning on wearing disposable gloves and a hazmat suit to change diapers. I’m guessing that will last about 2 days because who wants the process to be drawn out at 3 am with a screaming baby/babies?  But he needs to figure it out on his own.  He was horrified at the thought of picking up dog poop when we first met.  Now it’s just part of the joy of having a dog!

The honeymoon is OVER!

I kid, I kid. It’s not really all that bad.  I’m just feeling huge and sore most of the time. If I sit too long, everything gets stiff and I hobble around like a little old man for 2 or 3 minutes.  If I stand too long, my feet and knees ache.  I honestly feel the best when I’m just walking around.  Stairs are my nemesis…especially going down the stairs.  Pray that you don’t end up behind me on my descent because it’ll be a long one.

I’ve got a baby on my bladder and the urge to pee is constant.  I’ve thought about moving my desk into the ladies room.  (Our bathrooms are nice!).  I’m still drinking a ton of water and that doesn’t help.  But I’m so thirsty all the time so I just have to deal.

My engagement ring is off.  My wedding ring still fits so the swelling is minimal.  And nothing else seems swollen so I’m thankful for that.

Overall, I’m just feeling lazy.  I keep reminding myself that it’s part of my job description at the moment.  So I’m laying on the couch, binge watching Netflix and enjoying every moment.

My sweet little Butterbean loves to give me these soft, gentle kicks while my sassy, spitfire Lima bean…that child is aggressive!  I’m getting more and more long rolls and hard thumps.  And I’ve found that if I just rest my hands on my belly and use firm pressure, I’m always rewarded with some sort of karate chop.  Jerry will catch me staring at my bare belly, smiling like a lunatic and ask “what are you doing?”.  Just watching our little Beans wiggle.  It’s pretty adorable.

The ravenous hunger is pretty much gone.  I’m still super hungry when I wake up, but it tapers off over the course of the day.  I’m still devouring fruit like it’s my job and meat is my lowest priority.  I could sustain myself on grilled cheese, Mrs. Ts and berries.  I’m not sure if I’m just running out of room to overeat or what but I had popcorn for dinner on Saturday and toast on Sunday and was just fine.  My thirst is insane.  I can’t get enough ice water…it’s my major craving right now.

I’m happy but really, really weepy.  I get choked up over pretty much anything and everything these days.  It’s not a long drawn out cry, but ya know when your chest wells up and feels all tight and you get teary for a few seconds…yeah. That’s me.  Of course Howard was on vacation this week so I listened to a lot of Pandora…and boo hoo hooed my way through pretty much every station I tried.  I’m talking to you Ed Sheeran and Taylor Swift.

I’m slightly concerned about my post-partum mental state.  Anxiety and depression are no strangers to me so I’m looking into some options, primarily placenta encapsulation, as I’ve heard a lot of great success stories.  And Jerry was grossed out by baby belly buttons…

Amazing lunch at Piccolo Forno.  Jerry bought me the most adorable onsies that say Mommy loves me and the sweetest card ever.  Of course I got all choked up and cried for a while.  Maybe I’m getting all these tears out of the way so I don’t make a scene at their birth, sobbing like a nutjob.  Probably not. 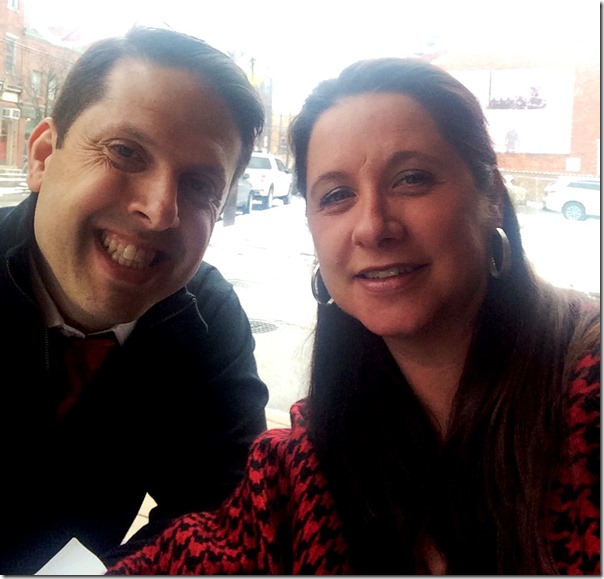 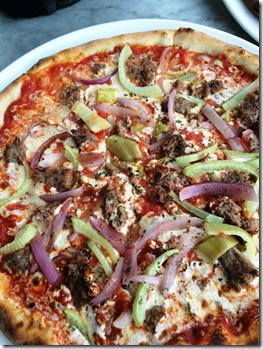 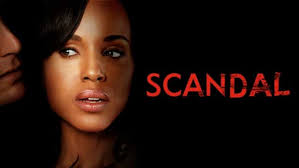 It was such a lovely, perfect day.  Our last Valentine’s as a family of 2.  Next year, there will be a new girl to steal Jerry’s heart…and I’m 100% ok with that.  sniff

*Comment of the week.  During our staff meeting…“If we have a fire emergency, how do we get you out of here?”  Um, I walk down the stairs with everyone else?  And then Limabean kicked me really hard and I must have winced because my boss stopped in the middle of a sentence and asked “Are you in labor?”.  Um, no.  I was also told that I’m starting to waddle.  Which is total BS!  I know my milkshake isn’t bringing any boys to the yard these days but I am NOT waddling yet.  I will definitely own it when I do.  He’s one of those guys that is always saying something snarky so I just ignored him.

* I’m pretty sick of needles.  I’ve been shooting up for 176 days and while the PIO injections only lasted 13 weeks, I’m still on daily doses of Lovenox.  I’ve gotten pretty good at them but I’m running out of loose skin on my stomach.  I am thankful they are keeping the Beans and I healthy but I’ll be uber happy when we are done with them.

1 thought on “27 Weeks Pregnant with Twins”