We hit another milestone! At 28 weeks, viability skyrockets.  90% of babies who make it to this stage of gestation survive.  Long-term complications are still a possibility but the likelihood decreases with each additional day in utero .

An eggplant is pretty freaking big!!  And delicious.  Who wants to make me some eggplant parm???

Your baby is settling into the proper position for birth, with his head facing downward (toward your body’s nearest exit!). Your little work in progress is now about 2.5 pounds and almost 16 inches long (measured head to toe). He’s busy these days blinking (outside in the real world, blinking is necessary to help keep foreign objects out of the eyes). That skill is just one of an already impressive repertoire of tricks he’s working on, like coughing, more intense sucking, hiccupping and, perhaps most important, better breathing.

Baby Might Be Dreaming
Dreaming about your baby at 28 weeks pregnant? Your baby may be dreaming about you, too. Brain wave activity measured in a developing fetus shows different sleep cycles, including the rapid eye movement phase — the stage when dreaming occurs.

I’ve had several people tell me this week that I’ve popped.  And they see me every day.  I’ve also had a couple tell me you can’t tell that I’m pregnant from behind and I think they’re right.  This bump is like a big, hard basketball jutting straight out from my midsection.  Catch me from the side though…whoa.

We met with a new doctor today and I really liked her.  She was great about answering all of our questions and had a great “bedside manner”.  That is very important to me.

I passed my Gestational Diabetes test!!  Quite frankly, I’m shocked.  SHOCKED!  But thrilled.  Bring on the donuts! I also had a hemoglobin and platelet screening (to check for anemia) and it was normal.  No protein in my urine.  Blood pressure looks great.  Weight gain is right on track.

She found Lima Bean’s heartbeat right away.  Our shy guy, Butterbean, was moving all around but away from the Doppler.  But she finally got a good reading and both heart rates are strong.

I also questioned the whole “no exercise” thing, as movement feels really good to me.  As everything is going so well, she indicated short amounts of light / moderate exercise (i.e. walking) should be fine.  She said exercise is generally beneficial in pregnancy. It helps to strengthen your pelvic floor, which makes for an easier delivery.  Just don’t over do it or push too hard.  Be smart.  I can do that.  Jerry is still skeptical.

It was a great appointment and I couldn’t be more thrilled at how things are progressing. I’m feeling amazingly blessed and thankful for how lucky we’ve been thus far.

One piece of advice I’ve heard from several twin moms is to have yourself organized and ready to go by 28 weeks.  Welp, I had grand plans of checking off all of the major To Dos from my list by now.  Annnnnd, ya know how grand plans go.  I’ve been way too lazy!!  It’s cold and dark after work and the couch just calls my name. I know there is nothing wrong with resting and it’s part of the reason I’m feeling so great.  So the laziness will continue within reason.  We have a good start on things but we need to wrap some things up by the time my shower rolls around on March 14th.

Our next few weekends are pretty low key so I’m confident we can knock out these things and still have time to be lazy!

I’ve felt pretty good this week.  I am, however, playing the pregnancy card every chance I get. I generally don’t like people to have to do stuff for me. It’s more efficient 9 times out of 10 to just do it myself.  But everyday tasks are just more trouble than they’re worth these days.  And most people are very kind and willing to assist.

I’m pretty wiped out by the end of the day.  As soon as I get home from work, I change into PJs and crash on the couch.  Jerry is a saint and takes care of Jacob.  And dinners are anything I can throw together in 30 minutes or less.  Everyone makes fun of my stocked freezer but it’s paying off big time these days!

I’m getting some heartburn at night and early morning that’s controllable with Tums.  It seems to occur when I have an empty stomach, which makes sense.

No new aches or pains…just the old annoying ones.  Sitting down is rough.  And ugly.  It’s more of a fall than a sit, really…once the downward motion starts, I have no chance of gracefully sliding into my chair.  Jerry tells me we’re going to need new springs in our arm chairs after this is all over. He’s right.

Waffles, cookies, cake, doughnuts, brownies…gimme, gimme, gimme.  ALL OF IT!  I’m not actually eating all of it but it’s nice to know I can if I want to.  I’m going to whipped up these Fudgy Coconut Oil Brownie Bites this weekend.  Portion control is helpful!

I ate fish this week!  But it was in the form of fried Lenten fare.  Does that count?  Probably not.  I had green beans with it though.  Score a point for consuming a veggie.

We currently have 6 boxes of cereal opened in our house. Cinnamon Life is my new favorite. We have zero bags of Mrs. Ts because I ate them all.  I’m still having PB&J 3 or 4 times a week.  Berries and clementines…every day.

Mix of good and bad.  It’s very inconsistent.  When I do sleep, I sleep hard and really well.  But I’m still waking up in the middle of the night a few times a week.

I’ve gotten an “Are you OK?” from Jerry several times during the night because of all the grunting when I roll over. I flip flop all night when I sleep and I also tend to be a groaner.  Apparently I’m making a lot of noise during my side-to-side adjustments because Jerry could sleep through the Super Bowl.  Heaving this big belly over isn’t an easy task!

What crazy wiggle worms we have!  Not only are they wiggling, but they are jamming  their little body parts into various parts of my belly.  All of a sudden a foot/elbow/knee/tushie will appear out of no where to the point where I can almost grab onto it.  Good times!

I’m a healthy mix of grouchy, happy and weepy these days.  I think that’s normal for this stage of pregnancy.

I find myself grouchy at times for pretty much no reason and just want to sit and not talk to anyone. At home this is isn’t a problem because Jerry knows me well enough to leave me alone or I can just go take a 2 hour shower if he’s feeing chatty.  Work is a different story because I generally talk to people all day and no one seems to respect the I’m wearing headphones for a reason…send me an email rule.

But the rest of the time…still happy!!

“You say you’re not going to order anything else and then more stuff shows up!”  I know, Jerry, I KNOW!   I just can’t help it.  Baby stuff is so stinking cute. But I’m officially cut off. Pinky Swear.

The last baby purchases until after they’re born…these little hats with their names for them to wear home from hospital.  And matching pjs. 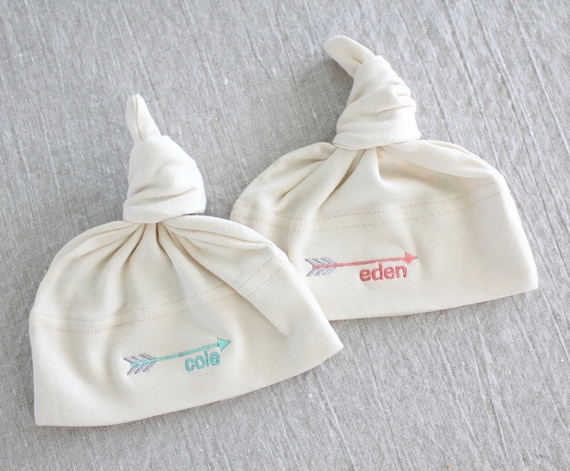 omg…I can’t even stand it.  Come on…they have to have coming home outfits!!

And now I’m done.  btw…Cole and Eden are adorable names but no, they’re not ours.

*  Speaking of names, baby names are official. Jerry & I call them by name all of the time now and I love it!  And I ordered the hats, so…done deal.  I know it’s dumb that we’re keeping them a secret but I like the idea of a little surprise when they’re born.

*  No noteworthy comments this week.  But I’m at the point where it is no longer questionable if I’m pregnant.  Random strangers will ask me how I’m feeling or when I’m due.  Only one person touched my belly but I knew her and she asked.  For some reason, it doesn’t bother me.

* I’m starting to get a little worried about Jacob.  I know he’s going to be great with the Beans but this is going to be a huge game changer for all of us.  He’s so used to getting a ton of attention and while Jerry and I believe we can still dote on him, it won’t be the same.  So if you stop over to see the Beans and you’re not afraid of dogs (or picking up poop), please walk him.  He’s a big marshmallow and pretty easy to handle.  And he’ll love you forever.

The days are ticking away…

4 thoughts on “28 Weeks Pregnant with Twins”