Let’s just think about this for a minute.  THIRTY weeks.  3-0.  How amazing is that?  I am in awe that I’ve been able to make it this far.  These Beans and I…we’re a lucky bunch. 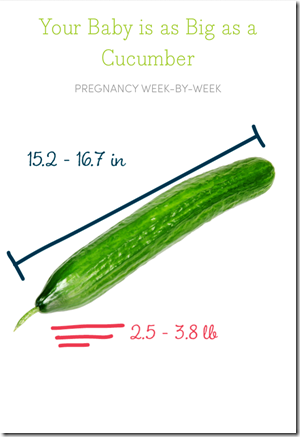 Your belly’s increasing size is a definite clue that your baby is getting bigger every day — now he’s weighing in at over three pounds (he’ll be packing on the weight at a rate of half a pound per week for the next seven weeks).

Baby’s Brain is Getting Bigger
Also growing at a quick pace these days? Baby’s brain. Until now, the surface of your baby’s brain was smooth — but now, your fetus’s brain is taking on those characteristic grooves and indentations. The reason for this change in appearance: Those wrinkles allow for an increased amount of brain tissue — a necessary change as your baby prepares to develop street smarts for life outside your womb.

Lanugo Is Disappearing
Now that baby’s brain and new fat cells are regulating his body temperature, the lanugo — the soft, downy hair covering your baby’s body — is beginning to disappear (no need for that furry coat anymore). But you may see a few leftover strands of fur on your newborn’s back and shoulders when he’s born.

Bone Marrow Is Making Red Blood Cells
Another big change at 30 weeks pregnant: Your baby’s bone marrow has taken over production of red blood cells (before, tissue groups and then the spleen took care of producing the blood cells). This is an important step for your baby, because it means he or she is better able to thrive on his or her own once born.

My pregnancy wardrobe is dwindling.  I want to live in leggings, tunics and long cardigans.  And I just might.  Mostly everything still “fits” ok, it’s just a question of what’s more comfortable. 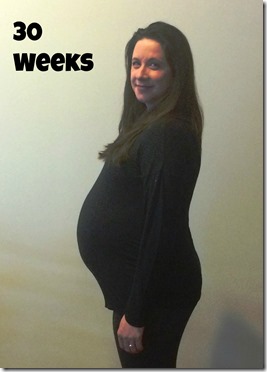 My whole upper body is constantly flushed.  Like I’ve been sunbathing in the nude (now THAT would be a sight!).  I’m crediting my post shower, coconut oil rubdowns to the condition of my skin…which is fantastic.  Seriously, I drank the coconut oil Kool-aid and will never use another moisturizer.  Stretch marks – 0; Bean Bump – 1

Oh hey +6lbs in 2 weeks.  Yikes!  This girl needs to cool it on the sugar.  Effective immediately.  I’m fully aware that a 30lb weight gain at 30 weeks is quite acceptable for someone carrying twins.  But my doctors don’t want me to gain more than 40lbs so let’s try to make it a more respectable 1 lb per week gain going forward, mkay?

We talked about my carpal tunnel and the doctor confirmed that it will probably just get worse.  In fact, she said she had it so bad that she couldn’t operate later in her pregnancy.  Fortunately it hasn’t gotten so bad that I need wrist braces but it’s nice to know they are easy to obtain should I really need them.

It was another uneventful appointment and that’s exactly how I like them!

Let’s talk about the good stuff.  No back pain.  No headaches.  No heartburn. Very few Braxton Hicks.  And…AND…we were hit with a blast of 35+degree weather early this week and all of a sudden, no knee pain!!  I said Wednesday morning, “Hey Jerry, watch this!” and then I skipped down the steps like a 5 year old!  Of course, he was less than thrilled by my gleeful display, as I have a propensity to fall down the stairs (or anywhere, really).  The temps dipped again the next day but my knees still felt pretty good. We have a warming trend approaching next week with temps in the 50s.  And I’m hoping I can put these aching knees behind me.

Carpal tunnel is no better/no worse.  My grip is really weak on my left hand and both of my wrists are pretty sore.  I have tingling in the fingers of my right hand for a few hours after I wake up. My fingers look like little sausages from the swelling and my wrists are noticeably chunkier.  But it is what it is.

I still have a good deal of stiffness if I sit too long, mainly in my hips. But it only takes a minute or two of movement to shake it off.  And I’m not waddling yet!

I had a bit of swelling in my feet and ankles one night.  My ankles blew up but my left leg was a little bigger than my right.  Given my history of blood clots, I was a little freaked out, as this is a definite symptom.  I elevated my feet and drank a bunch of water and everything was back to normal within 12 hours.  (BTW, Dr. Google’s recommendations for dealing with swelling during pregnancy are so annoying.  1. Stay off your feet.  2. Be sure to get up and move around.  Huh?)

I’m adding a probiotic back into my diet and the doctor said that I should be taking Colace every day.  Things have slowed down considerably which is understandable given I have 6-7 lbs of baby squishing my intestines.  This little cocktail is working wonders, btw.

A lot less weepy.  I’m definitely more irritable these days.  I’d say 25% of my mood is cranky.  And I hate being like that but it’s completely out of my control.  I just need an hour or two of “no talk time” every day to keep me sane. I deal with people all day at work, so it’s tough.  But Jerry goes to the gym after work and that hour at home alone, vegging out on the couch, is very good for our marriage.

But most of the time, I’m still happy.  And anxious. And excited. And terrified.  Big ball of emotions these days.

My love for English Muffins knows no bounds.  I’m devouring apples this week.  And ham, egg and cheese sandwiches.  I’m finding a big bag of raw veggies is way more appetizing than a salad so I’m taking advantage of that.  Greek yogurt with walnuts is also a favorite.  Meat is still blah.  Fish is still at the top of my YUCK list.

I’ve been trying to catch it on video but it’s not all that easy.  Of course they stop dancing as soon as the camera is on them.  They are insanely active but I really feel strong movement from baby girl just based on her position.  Every morning, they push their little tushies out as far as they can, which are both up high under my ribs. When I pat them hello, I can feel it in my pelvis.  It’s so weird!

*  There is a maximum of 8 weeks until we meet our babies.  I just can’t wrap my head around that!  And Jerry is still in complete denial that they are coming anytime before May. Actually, he wants to push my due date back until the end of May “because he’s not ready”.

*  Up until about a week ago, Jerry was also in denial about the fact that I could actually go into labor.  He just assumed that we would pick a date, schedule a c-section and that would be that.  Now that he realizes it’s a very real possibility that my water could break or I could go into active labor at home.

*  I’m getting a lot more “Not long now!” comments.  Which I translate as “Wow you’re enormous.  Please don’t give birth in this elevator”.  Sometimes I just flash my “shut up” smile but sometimes I blurt out “I have at least 6 more weeks.  But thanks”.

*  I’m still watching A Baby Story.  And I am so confused. These women have 25 friends and relatives watching them push out their babies.  Is this a thing?  They all crowd around her nether regions, snapping pictures and taking videos, screaming and high fiving.   I would lose my mind with all that chatter!  And maybe I’m just overly modest, but I want some privacy.  No media! I hate to disappoint anyone, but our birth is not going to be a spectator event.

*  Water is the cure for everything in pregnancy.  Have a headache?  Drink some water.  Constipated? Swollen feet?  Drink more water.  Braxton Hicks?  You’re probably not drinking enough water. Who knew?

*  And just to freak Jerry out…

7 thoughts on “30 Weeks Pregnant with Twins”