Welp…here we are.  Five Months old.  FIVE MONTHS!!! I just don’t know how it’s possible.  And I’m more smitten with these two Beans than ever! 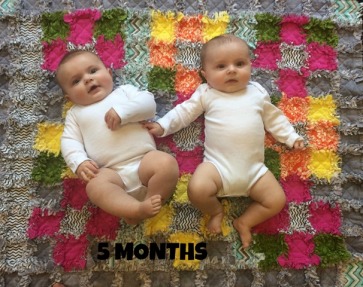 These monthly updates are going to be a little more condensed now that the each get a weekly feature post.  But we can still get into some good stuff.
Fynnlee Ann

Eat
Fynn gets 5 six ounce bottles a day.  She’s entered the fun stage of only wanting 2-3 at a time and then getting too distracted to finish.  So feeding her takes a quite a while.  My magic trick with her is holding her like a baby (I know, she is a baby…but she normally likes to eat practically sitting up) and singing “You are my sunshine”.  It’s a little frustrating but I kind of love it.  We started experimenting with solids this month.  I started her with Earth’s Best Organic Brown Rice Cereal which clearly tasted like wallpaper paste.  She HATED it!  That’s what I get for being all healthy and junk.  She’ll tolerate it if it’s mixed with bananas.  And she kind of likes sweet potatoes.  We’re doing all purees at the moment but my goal is to move onto more Baby Led Weaning type feeding once they hit 6-7 months.    We’ll see.  This month I plan on introducing peas, green beans, peaches, apples, carrots and squash.  Should be an adventure!

Sleep
You know what happens when you brag to everyone you know that your baby has been sleeping through the night since she was 2 1/2 months old?  You guessed it…she stops doing that.  This has been a rough month, sleep wise.  Poor little nugget had a stomach bug and her little digestive system just hasn’t gotten back to normal.  So we’re back to overnight poops and obviously that wakes her up.  We currently have anywhere from 2 to 823 wake ups every night.  Sometimes because she needs a diaper change.  Sometimes because she wants to party.  Bedtime is still 6:30/7:00 and she does not like to be kept waiting for her beauty sleep.  And she’s up for the day around 5/5:30.

Poop
So much poop this month.  So much.  The diarrhea started about 10 days ago and it’s never really stopped.  Yes, I’ve spoken to our pediatrician and it’s something that just needs to run its course.  No, they don’t think it’s the formula as the whole house had it.  And no, they can’t give her anything.  In the meantime, she has a wicked case of diaper rash (seriously, so bad…I feel awful) and spends most of her nights at home buck naked on a towel trying to air everything out.  I’m pretty sick of poop, quite frankly.

Stuff
* loves the bumbo if she has something to entertain her.
* soooooooo close to rolling over.  Wants it…bad.
* belly laughs at everything.
* starting to see some signs of potential “stranger danger”.
* loves her bathtime but has almost outgrown the tub
* working hard on sitting up and standing with “strong legs”.  Just not there yet.
* loves to flap her arms like a bird and kick her legs like riverdance

Eat
Greyson gets 5 six ounce bottles per day.  He has also been engaging in some meal time shenanigans.  It takes fooooorrrreever to get him to eat at times.  He’s gotten really good at holding onto the bottle himself and really wants to take over his own feeding.  But he pulls the bottle out of his mouth and then can’t get it back in.  So he still needs his Mommy, which is just fine by me.  While I love his independent spirit, I’m not ready for it.  At all.  Solids are a bit easier for Greyson.  He doesn’t really mind the wall paper paste and really likes it when it’s mixed with ‘nanas.  Sweet potatoes were a hit too.  He’s absolutely adorable when he eats because he tries to stick his whole head in the bowl.

Sleep
Greyson moans in his sleep.  Really, really loudly.  And he does this 297 times every night.  He gets a good stretch of sleep from about 7-10 (which, coincidentally is when I’m awake) and then about every one to two hours, he starts his moaning and groaning and wakes the whole family up.  I always find him busted out of his swaddle, thumb in mouth, half asleep…and I re-swaddle, re-pacifier, restart his mobile and he falls right back to sleep.  And then he got the tummy crud from Fynnlee and we have a few dirty diapers waking him up as well.  Sleep this month has just sucked overall.  (Repeat after me…it’s a phase and will get better.)

Poop
He’s pretty much in between sizes in diapers right now.  Size 1 is way too small and Size 2 is too big.  I know we need to just buy a pack of a different brand to get him through the next week or so but I’m cheap so I just keep dealing with the blowouts.  Lots and lots of outfit changes for this little guy.  One time, the poop just shot out the side of his diaper.  None of it was actually in his diaper, just smooshed all out the side.  And we were at someone else’s house.  And I didn’t have any extra clothes with me.  #rookiemom  Have I mentioned that I’m pretty sick of poop?!

Stuff
* has rolled both tummy to back and back to tummy but not consistently.
* not even close to sitting up on his own
* always happy, always smiling.  Loves everyone.
* talks up a storm!

Torticollis update
This actually applies to both kiddos.  We took Greyson and Fynnlee to the CraniofacialClinic at Children’s Hospital to be evaluated for helmets on the 24th.  If you recall, our pediatrician didn’t think Fynnlee would need a helmet but we took her for an evaluation anyway.  Well…turns out, not only does Fynn need a helmet.  She also has torticollis and it’s worse than Greyson!  Granted, it’s worse because Greyson has been working with a physical therapist for the last 2 months.  We met with both a physical therapist and a nurse practitioner who took lots of measurements and put them through a boatload of tests.   While I knew Fynnlee had a flat spot on the back of her head, I never noticed that she had a flat spot on the left side of her head as well.  It’s not nearly as pronounced as Greyson’s…but it’s definitely there. So, the babes are getting measured for their matching helmets and I need to set up an appointment for Fynnlee to be evaluated by early intervention.  And in the meantime, they need to do lots of tummy time, bumbo time and basically just stay off the back of their heads.  Easy peasy, right?

These kiddos continue to amaze me every day.  I feel like the luckiest woman alive to share my life with them.