Is this the face of a miserable child or what? My poor baby. 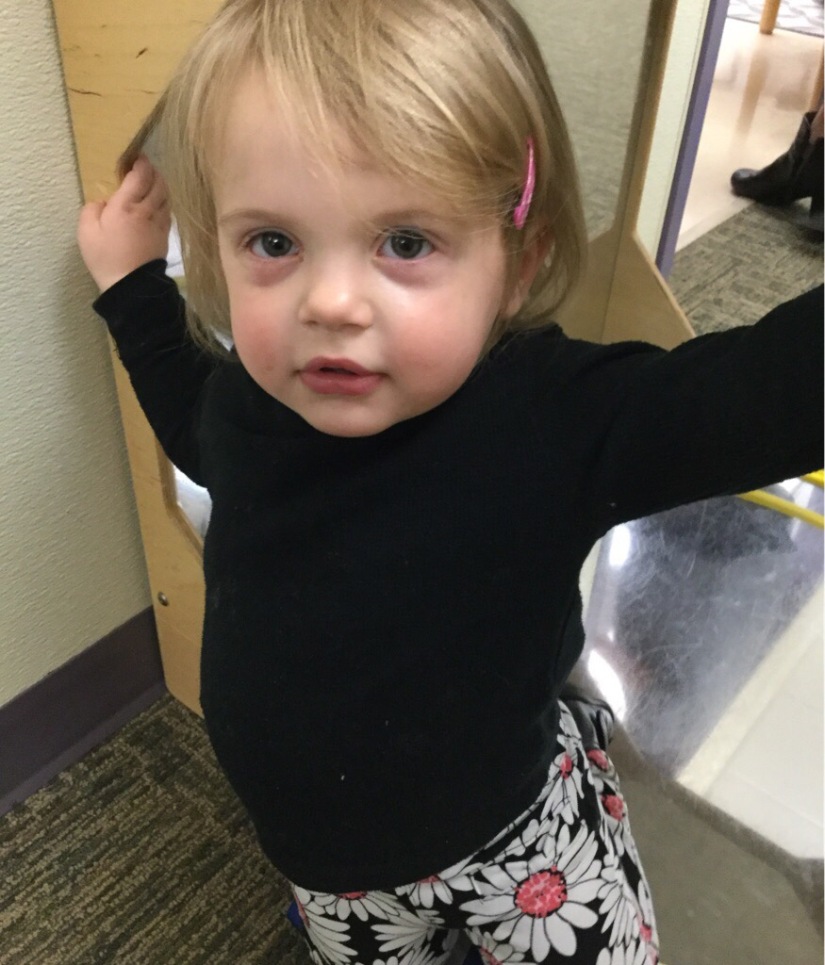 Our week continued to be pretty crappy (or NOT crappy, depending on which way you look at it)…Greyson was still cutting teeth and feeling sick. And Fynnlee was still dealing with her digestive issues and diaper rash. But we decided we would press on and hope for the best. We were so excited to see Aunt Stephanie so I picked the kids up on Friday at noon and we were on our way.

We were pretty hopeful when they both passed out 30 seconds into the drive. But around the 45 minute mark, Fynn woke up screaming (like crying SO hard). Jerry pulled over on the turnpike and I changed her in the back of the van. That’s when I saw how bad the diaper rash was (aka bleeding) and we made the tough decision to call Steph and tell her we couldn’t make it. There was no way I could let this child sit in a car seat for another 3 hours. We turned around and called our pediatrician on the way home.

If you don’t like reading about poop, skip to the next paragraph. So basically what is happening with Fynnlee is she got herself constipated and when she finally went it really hurt. Now, whenever she has to go, she squeezes her little butt cheeks together so tight (she’s afraid) and only a little bit comes out. She was doing this 10+ times a day (hence the diaper rash). Currently, I’m pumping her full of prunes and a probiotic and hoping she’ll have a big BM she can’t control and see that it doesn’t hurt to go. As far as the diaper rash is concerned, our doctor recommended Calmoseptine…which I had never heard of but is a miracle!! Ironically Danielle had actually mentioned it after my last post and we picked up a tube on the way home from the doctors. Within one diaper change there was marked improvement. You put the calmoseptine on the affected area and then cover with a zinc diaper rash cream (my favorite is Triple Paste). There is a little menthol in it, which I thought might burn a little but I can only assume it’s soothing based on Fynnlee’s reaction. Prior to this cream, she would literally scream “NO, NO, NO…!” when she saw a baby wipe (and we were using water wipes with nothing in them). It killed me. So, if you have a baby, pick up some of the pink stuff in the green tube (Calmosepine)!

Back to Friday…We were so excited when Stephanie offered to come to us! Rather than rush around on Friday, she decided she’d drive to Pittsburgh on Saturday morning and spend the whole weekend with us. So Friday night was low key. I pilfered through the fridge and freezer and managed to find enough stuff to make pasta with sausage, peppers and mushrooms. The kids ate it too! 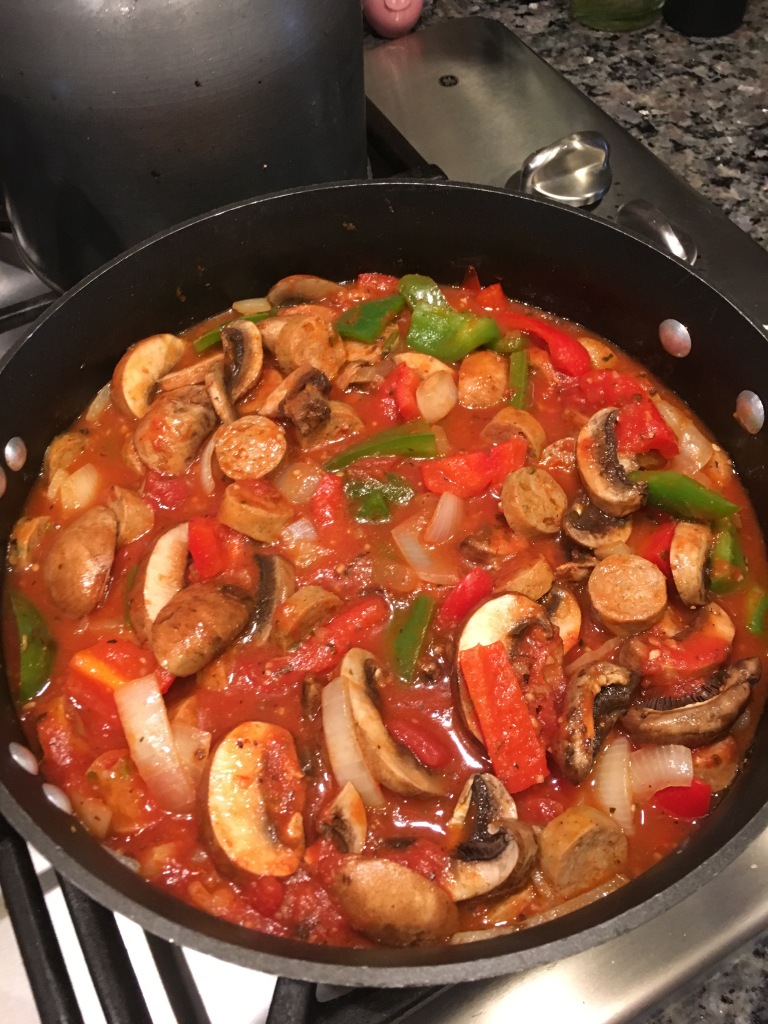 Saturday morning was pretty uneventful. We hung out around the house for a bit, went to Whole Foods (the kids napped & Jerry stayed in the car) and then back home to wait for Aunt Steph. 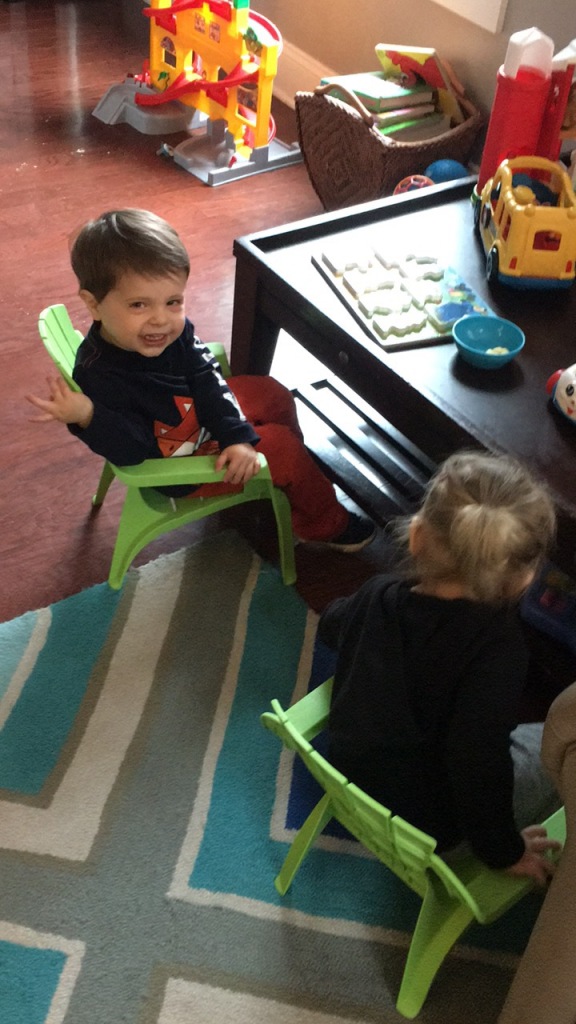 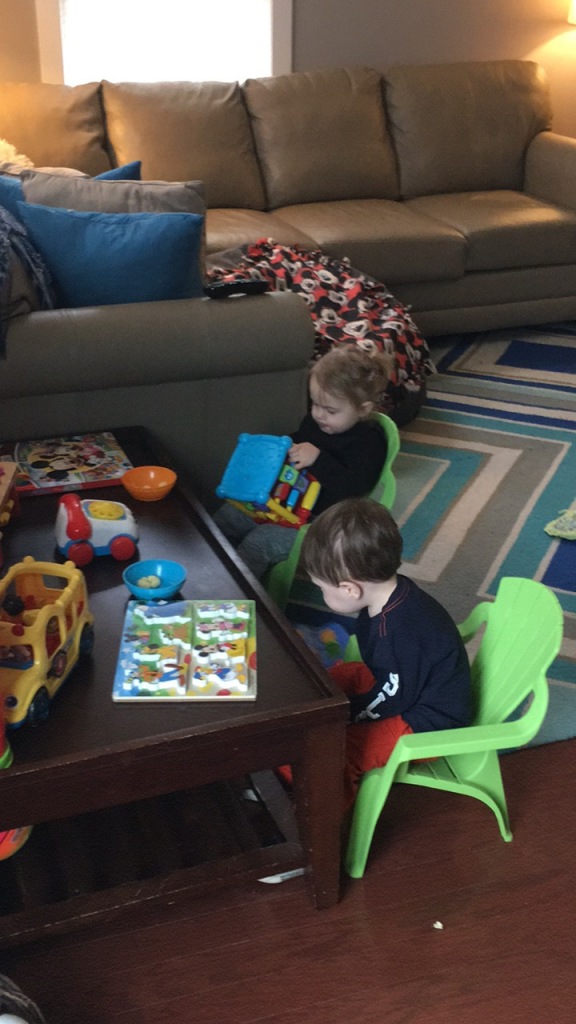 Aunt Stephanie got to our house around noon and she brought pizza! So we all had a nice, big lunch and then headed to Ross Park Mall. It was pretty ugly out so an indoor play space sounded like a good idea. 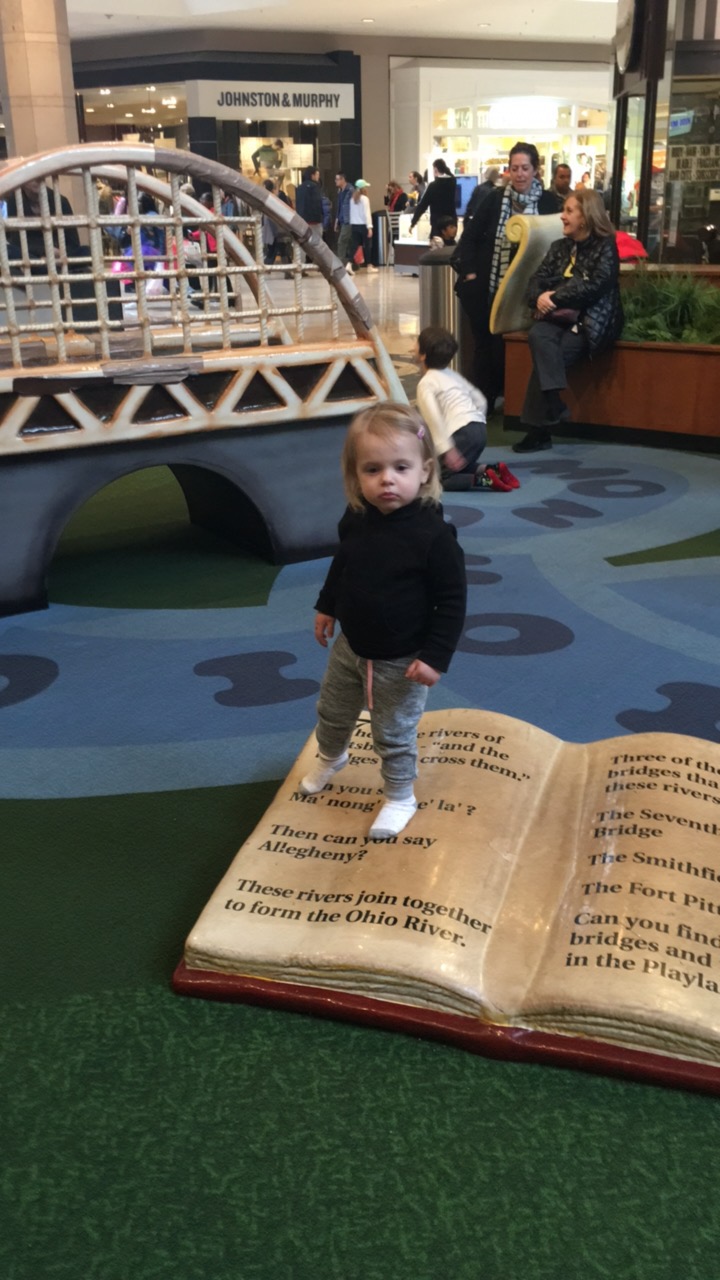 Note I said “sounded” because that play area is always hit or miss. Often times, there are kids have no business being there (aka they are bigger than me) or there are too many kids running wild (they are kids, I get it) or there are little punks whose parents are a-holes and just stare at their phones the whole time, completely unaware that their kid is being a jerk. 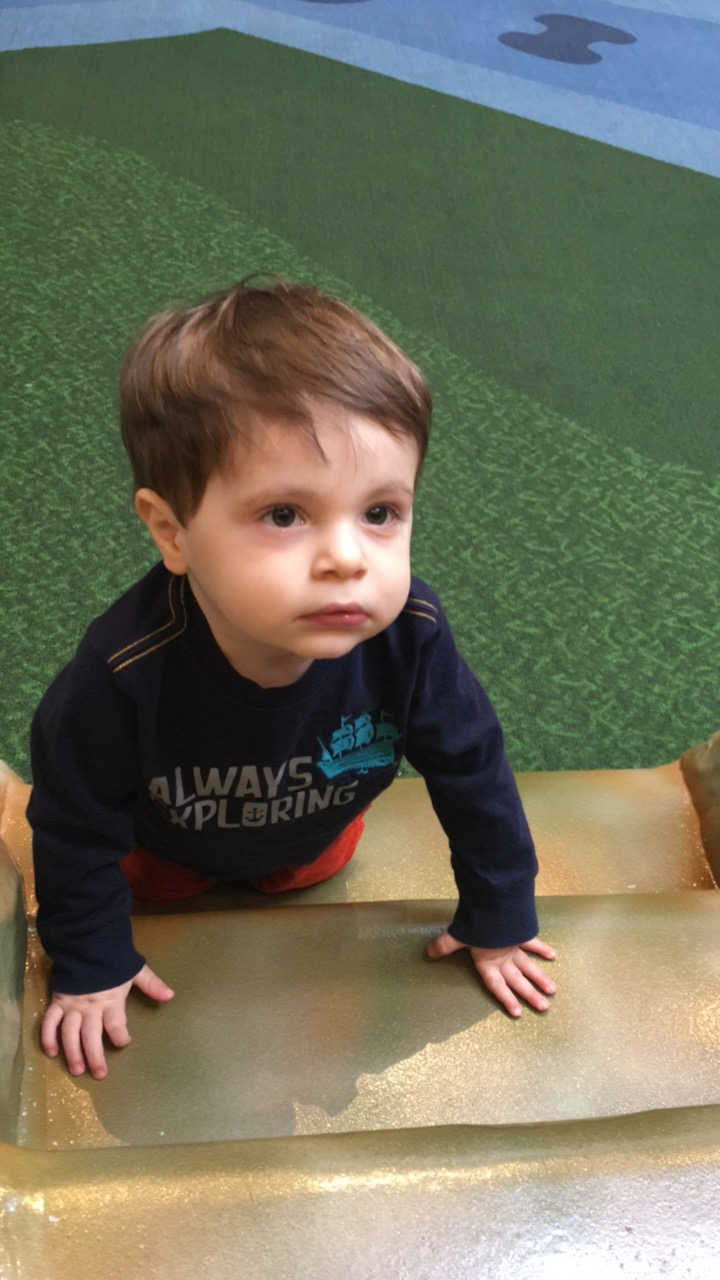 Saturday was one of those “miss” days…and after Fynnlee got knocked over, I knew it was time to leave. Or I would be bailing Jerry out of jail.

So we walked around. 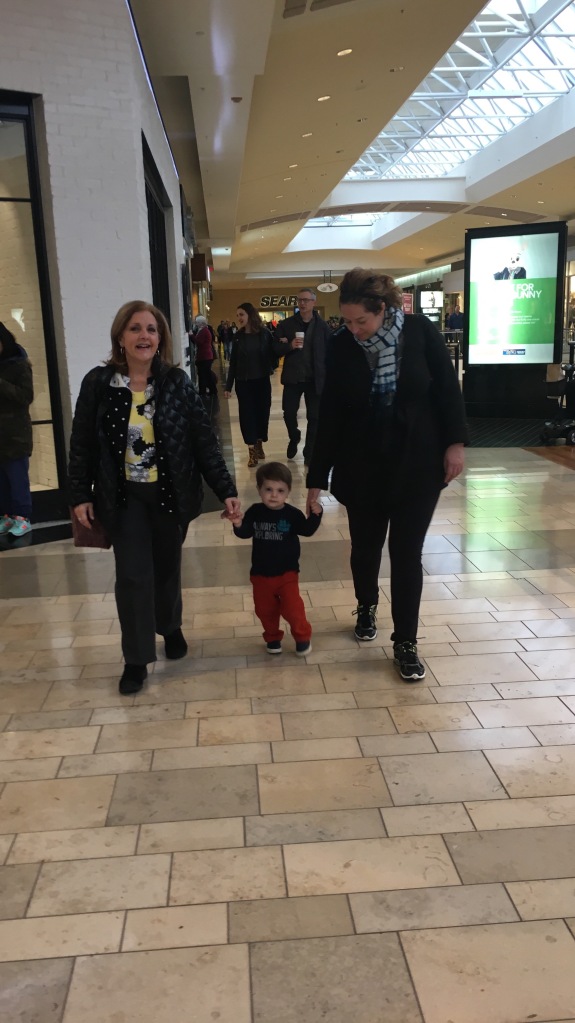 And played in the cars 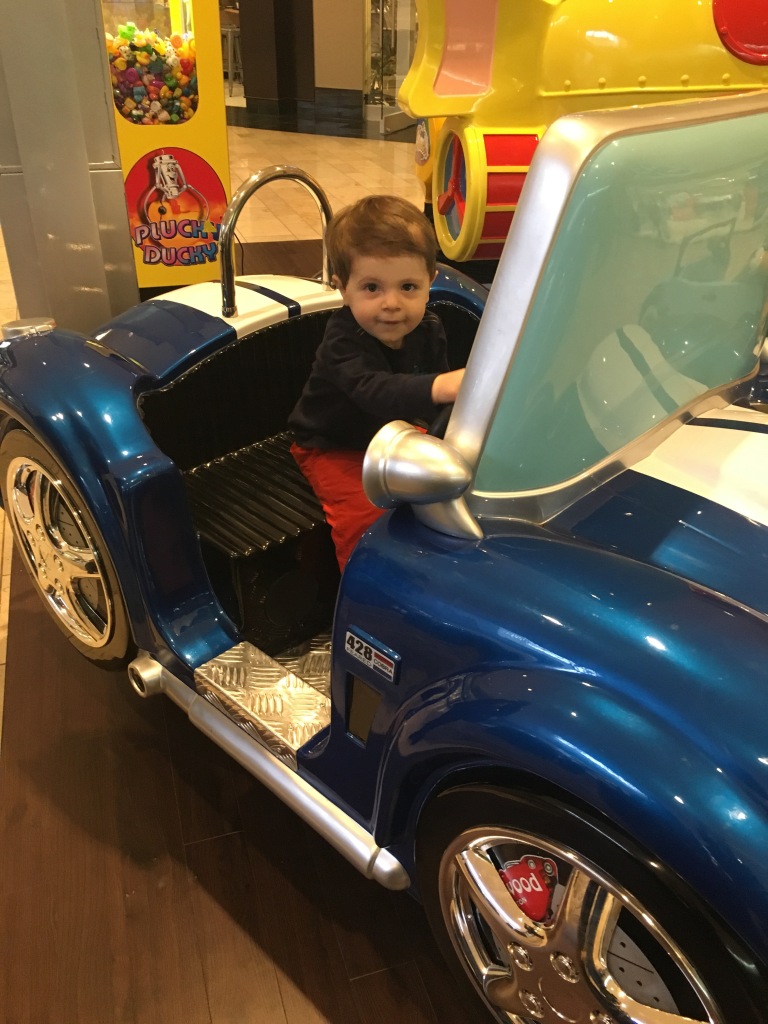 And rode the train. And we still had a great time! Although Fynnlee didn’t love the train. Grandma & Papa agreed to babysit so Jarrad, Steph and I wrapped up our day at Patron.

Sunday had Jerry up early and we spent a lazy morning with Mickey, Daniel and Do Do (Pink fong). It was a pretty nice day so we decided to try a new playground at Pine Community Center. I didn’t take many pictures but it was a nice park. 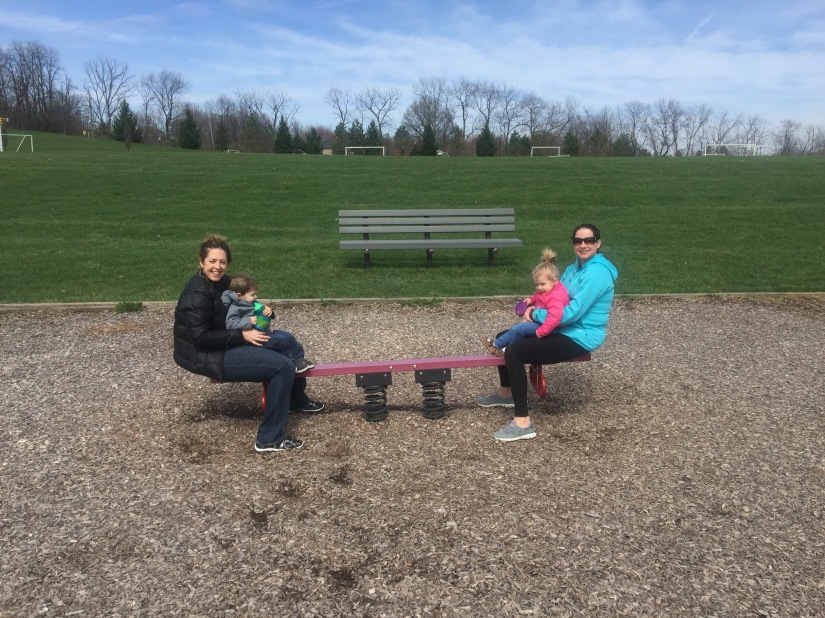 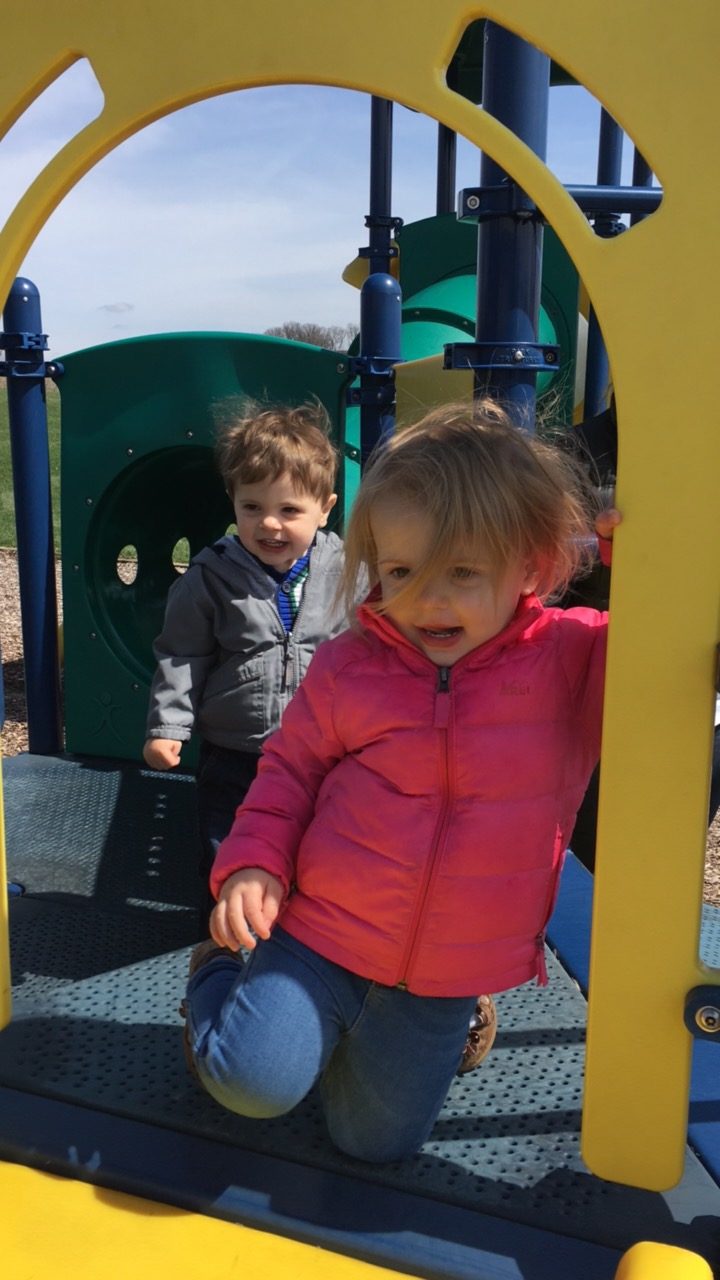 Grandma made a fantastic Sunday dinner (again, no pictures…sorry Grandma!)…chicken cutlets, roasted carrots and potatoes, green beans, chicken thighs and apple tart for dessert. Fynnlee ate all of Papa’s chicken (she’s got that sign for MORE perfected) and a little bowl of ice cream. Greyson had a meltdown pretty much through the whole thing (poor bug and his ouchy molars) so we had to say goodbye sooner than we would have liked.

We have another trip planned to see Aunt Stephanie in June and we’re already counting down the days!!