Hellllooooo Friends! Anybody out there? I know. It’s been a WHOLE YEAR since I’ve stepped foot onto these blog pages. No excuse other than Life.

But I miss keeping a little journal of our lives so I’m back today to share some highlights of 2018. It was a pretty great year! We had some big life changes and the kids hit some big milestones so lets jump right in! In no particular order….

We bought a house!

Our townhouse went on the market in February. And despite the efforts of our awesome real estate agent, we didn’t have a ton of traffic. All along I had been stalking Zillow and Realtor.com checking out what was available in our desired area. This little gem came on the market on a Monday and we sealed the deal on a Wednesday. It wasn’t an easy process…there was a lot of interest in the property. I wrote a letter to the homeowner explaining why this was the perfect house for our family.

We moved in mid July. And we are in love with the place!  She puts on quite a show at Christmas.

We are so excited about the summer and have plans for a MASSIVE vegetable garden. Eeeep!!

I quit my job

And am currently a Stay at Home Mom. My company had been going through some growing pains over the last couple of years. I knew there were some layoffs planned for late 2018 and when they offered a voluntary separation plan, I decided it was time for a change. The initial thought was I’d take a couple of months and then look for another job. But…after some further discussion, the plan now is for me to stay home with the kids until they are in kindergarten, with the understanding that I can go back to work if our budget requires (or if the kids get to be too much).

Unfortunately, this meant the kids would be leaving Bright Horizons. They had been with that daycare since they were 3 months and we have been beyond thrilled with their care. The teachers have all been amazing and they made the best little friends. It was really bitter sweet.

With Miss Leah on their last day…

And I wasn’t sure how I’d like being home and not working but I’m happy to report…I absolutely love it!

We belong to the YMCA and are involved in a bunch of activities through their organization. Swim Lessons, Gym Jamboree, Cooking class, Art class and they have childcare so I can exercise too.

They are also in preschool at a local church 2 days a week and are loving it. They participated in the Christmas Program and it was precious.

The kids are potty trained!

I’m sure you’re thinking, ‘well, yeah…they’re 3 1/2‘.  But I honestly thought we might never get here.  We did 2 potty training boot camp weekends that were epic fails. The first one lasted 2 hours and included 13 pairs of dirty underpants (plus multiple hardwood floor puddles). The second one lasted a day but it was clear that they weren’t getting it.

So we took a step back and just waited until they showed more signs of being ready. That happened mid summer for Greyson and literally within 12 hours, he was peeing and pooping on the potty exclusively .  He has only had a handful of accidents (most of which occur because he misses the toilet).

Fynn was a different story. She got the whole pee on the potty thing, but the dreaded #2 was a nightmare. She was petrified to go and had zero problem sitting around in a pair of poopy underpants.  I’ll spare you all the details but it was totally disgusting and most of the time, we had to cut her undies off of her to avoid a humongous mess. But patience prevailed and one day, she just did it! And never looked back.  Both kids still wear pull ups at night.  But it just goes to show that every kids is different and they will do it in their own time. And not a minute sooner!

We traveled to Rhode Island for GGs birthday

It was the kids first plane ride since they were less than a year old.

It was for a very special birthday celebration.

We had great time catching up with Jarrad’s family and having a big ole party!

Wow was it a great holiday! Actually, all of December was pretty amazing.

And the same Santa showed up for each event, which just solidified that he. is. real. And awesome!

As you can see, they both were brave enough to sit on his lap and tell them what they wanted.  They were REALLY into presents this year.

Elliott the Elf was sent to stay with us and he was a huge hit! We’re sad he had to go back to the North Pole.

We spent lots and lots of time with family and the kids were spoiled beyond words.

This post was kind of all over the place but that’s what happens when you don’t show up for a year! I have a 2018 photo dump later in the week and then hope to get back to updating a couple times a month.

Well, all of our stuff has been moved out and we have a little bit of cleaning to do…but it’s time to say goodbye to Shelly Street. 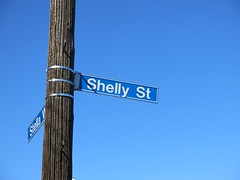 The empty rooms look so sad.

As much as I complained about the parking, the numerous hills, the stairs, etc…we’re going to miss our little townhouse.

It was the first place we lived together, where we got engaged and had the first look for our wedding.  It was Sherman’s last home…and Jacob’s first.  We will always look back at our time on Shelly Street and be thankful.

We climbed on to the deck that sold us on the house in the first place (and probably sold it for us in the end) and said goodbye.

Thanks for the memories….

This is the current state of our house.  I feel like all I’ve done over the past week is pack boxes…and yet, it looks like I haven’t made a dent!  Ugh.

The move will be a 3 day process:

Friday:  Bruce the Moving Guy and his crew come and move all of our big stuff (aka the mammoth Red Rojo cabinet that weighs 4000 lbs)

Saturday:  The Cavalry (Jerry’s big strong friends) will come and help load all of the boxes into the Uhaul and take them to Cranberry.

Sunday:  Jerry & I clean Shelly Street and move whatever leftovers there are to the new place in Berkley Manor.

The walk thru will take place on Monday or Tuesday and the closing is scheduled for the 4th.  Wow…talk about a whirlwind!

We put our Southside Townhouse on the market at the beginning of January.  After meeting with a real estate agent, Jerry decided we could get more bang for our buck if we sold it ourselves.  The plan was to list it on Housepad for a few months and if we didn’t get much traffic, we could always list it with an agent in the spring.

So we decluttered and scrubbed and touched up and made that little townhouse shine.  It was listed online on January 4th.

View from the outside

Annnnnnd…the big selling point of the house on Shelly.  The deck.

Oh, and the view from the living room.  That picture above was taken on Thanksgiving morning at sunrise.

The house was on the market for 10 days before we scheduled our first viewing.  He made an offer the next day.  And after some slick negotiating from Jerry (and his very business savvy father), the little house on Shelly was sold. We move out on 2/28.