My favorite kind of Friday night.  Jerry grilled up some flank steak and asparagus and I made my famous farro with sun-dried tomatoes. (Remember I said on Friday that I’m not particular about my meat?  I take it back.  I bought this flank steak from McGinnis Sisters and it was locally sourced.  It was, hands down, the best flank steak I’ve ever had!  We will be rethinking our meat consumption).  We binge-watched about 4 episodes of Sons of Anarchy and were in bed by 10:30.  It was a late night for us!!

Jerry & I decided to hit an auction on Saturday morning in Troy Hill.  An antique store was being sold, along with all of the contents.  This was our first time attending one of these events and we couldn’t believe how many people showed up!

There was a real auctioneer and everything…

There was a ton of stuff for them to go through and people were bidding on one thing at time.  It was a huge bust for us.  So we left after 10 minutes.

Since it was still early and we were already out & about, we went to the Home & Office Consignment store in Bethel Park.  They have a ton of furniture and I ended up buying these two beauties. The chest of drawers may become my coffee bar in the new house.  Or it might be used somewhere else.  It’s solid wood and in decent shape and my plans are to sand it down and restain or paint it.  I’ve been stalking DIY blogs for the last few months and am feeling pretty excited for the challenge.  That chair is hideous but was only $8.  Jerry thinks I’m nuts and insists that it will look exactly like that when we move out of Lot 256 in 5-6 years.  Challenge accepted!  I can’t wait to start working on these two little treasures :).

We met some friends at Ten Penny downtown for dinner and the Pens Game.  I forgot my phone (and camera) at home (whaaaaaaaa!) so no pictures of the food.  But I had the best blackened tuna of my life and would definitely go back there again. And the Pens won.  It was a great night!

Jerry planned my birthday surprise for this weekend and a few days before, I guessed what it was.  Horseback riding!  I love riding horses and in my youth, would spend a week at summer camp riding and caring for them.  Then I would come home and beg my parents for my own horse.  And they always said no.

So on Sunday we took a trip to the Rolling Hills Ranch in Bridgeville.  I broke out the Frye boots and used them as they were intended!

It was a beautiful day and the place is just gorgeous.

That is a big turkey on the right.  I’ve never seen one all puffed out like that!  We have tons of wild turkeys around Western PA.  One time I saw a big flock of them run across 279…it didn’t end well.

My favorite dude out on the ranch.  Jerry riding a horse is the best thing ever. Especially when they run.  He bounces all over the place and giggles like a little kid.  I love it.

My horse was named Wing-dwag, or Ween-dawg…something like that.  I just called him dawg.  He was a little on the ornery side…but that’s how I like em.  Spunky!

It was a stellar day and I can’t wait to go back to the Ranch.  I need to buy a cowboy hat.

After our trail ride, we went to On The Border.  The Dirty 30 is the worst when you’re at a  Mexican restaurant.  Jerry and I told them we didn’t want any chips & salsa (whhaaaa!) and only looked at the Border Smart menu.  I got the chicken tacos and the lime chipotle rice and he got the chicken fajitas.  Honest, I didn’t really feel too deprived. Until I spotted the cheesy enchilada and queso at the next table. I had to sit on my hands to prevent a scene.

The rest of Sunday included a trip to the mall, running Jacob around the dog park and some cedar plank salmon.  We hit the hay after 2 more episodes of SOA (at the reasonable hour of 9:25) and now it’s time for Monday.  Bring it on!

Yesterday was the first day of spring.  Today it snowed.

Excuse me while I bitch slap Mother Nature.

Yes, it is snowing in Western Pennsylvania.  And while I am really sick of everyone complaining about the weather…I can’t stop complaining about the weather.  Even those who embrace Winter (neither Jerry nor I are one of them) are over it.  This has been the worst I can ever remember, between the massive, constant snow and the ridiculously cold temperatures. Over. It.

One day last week, I got in my car and it was 7 degrees.  And I burst into tears.  Puhlease, Mother Nature…throw us a bone!  I think we’re due.

The first concert I ever attended was Billy Joel when I was 14.  Actually, that’s a lie.  The first concert was Jack Wagner, but I’m not sure that really counts as I only knew one song.  But Billy will always be one of my all time favorites.  So when I heard he was coming to the ‘burgh…I suggested tickets would be an awesome Xmas present!  And that is the gift we bought for each other.

Before the show we met up with Bobbi Lynn and Eric at La Palapa, a new Mexican place in the Southside.  The food was good (I had the Steeler burrito) but it didn’t blow me away.  It was still nice to sit down and catch up with my BFF.

Waiting for the show.

Billy played for over 2 hours and definitely didn’t disappoint.  He’s aged a bit from the first time I saw him perform, but if you closed your eyes, you wouldn’t even know the difference. 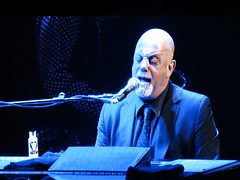 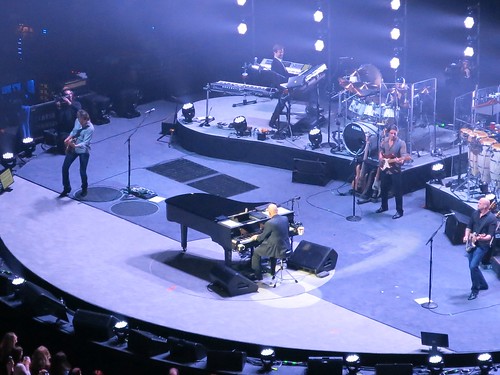 Here is the Set List from the show.  He played all of my favorites (And So It Goes…the best!) & it was the best show I’ve seen in a long time.